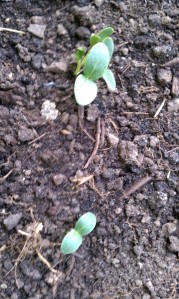 The idea took root a year ago: plant a garden in our backyard. A vegetable garden. Grow green leafy things to nourish our bodies right from home. High on a hill on Grand Rapids’ West Side, it seemed an inviting foray into urban farming.
The idea was proposed by Max, my restlessly creative son. When he is not learning to speak Chinese at Grand Valley State University, he brings home bags overflowing with great green things and stuffs them into the fridge. This is life with a college student who works at a health food store and is vigilant about every thing he puts in his body.
So sure, let’s do the garden because I don’t need to mow the lower lawn down there by the pear tree anyway. Although it may interfere with my bocce court. No matter. Garden it would be, for body and soul and making this little patch of the world a little more self-sufficient.
This would be our bit in the urban farming movement, a hopeful trend for greening up our healthy cities and reviving struggling ones like Detroit. Also it would provide cheap fresh food for our table. How much better to get it from the yard a few steps away than to drive to the grocery store which had it driven in from a few hundred miles away.
It took a year because most things do around my house. But after much planning, diagramming, buying of seeds and really heavy bags of gooey black stuff, we went at it. Max went at it first, digging out the grass aided by his friends Cang and Tim, Tim being way more comfortable shredding riffs in Max’s band than excavating clods of dirt.
Max and I framed it in with 6- and 11-foot lengths of 2 by 6’s. Looked nice and orderly there at the bottom of the yard, a little human organization imposed on the wilderness. Then came the kneading in of the peat and compost and top soil as if we were folding together flour and such for bread. Remove more clumps of grass, rake out the soil till it’s a delicious black.
At last, then, time to plant the seeds. Max chose lettuce, kale, spinach and cucumbers, a fine mix for summer salads and industrial strength smoothies. He dropped the seeds in thoughtfully, carefully, smoothing the dirt over them with his hand not unlike a Buddhist monk creating a mandala. Watered it down. Looked it over. Lovely. Garden planted, now let nature rock.
Just a few days later, nature did rock. Sprouted, rather. Yielded up a fetching bright green row of little lettuce nibbles, which upon spotting them made me smile with delight. Really, already? Way to go, earth! You’re such an efficient food factory!
As I showed this to Max, he also spied tiny sprigs of spinach and coy cucumber petals poking up in circles. He laughed with joy. Wow, amazing! You just plant the stuff and a few days later up it comes. No chemical applications required. No major machinery. Just a good hard digging of the earth and planting of the seeds and anointing all with water. Dirt does the rest.
It’s a sacred process, really, tending to the good earth that was created to feed us. Miraculously, it does so with remarkably little coaxing, even after all the abuse we have inflicted on it. All it takes is paying a little attention to it, gently kneading it and lovingly watering it. So little work for such a generous bounty. It calls for a hymn of grateful praise.
Now comes the weeding. It’s the least we can do.