meditating on coffee and steve earle

As an intermittent meditator for more than 30 years, I occasionally look for
strategies to help me resume a regular practice. Lately I have taken to
meditating while holding a cup of coffee. This may seem reckless and
anti-meditative, since it requires focus to hold the cup so it doesn’t spill
and scald me, which would quickly put an end to the meditative state. However,
it actually works pretty well.

Holding the cup
serves as a physical adjunct to the mental mantra. It helps keep my body still
and at a mild point of attentiveness. Just as the mantra brings my mind back
home, the coffee cup brings my body back to itself. It brings comfort to my
hands in the same way holding a baseball does. Its shape, solidity and warmth
are soothing. And the occasional sip doesn’t hurt, since I dearly love coffee.

I owe this new
variation on meditation to my mom. She religiously meditated each morning in
her corner chair while holding a cup of coffee. Hers was no TM-style mantra
however. She would sit, Buddha-like, coffee cup poised on a saucer, brows
slightly furrowed as her mind covered the gamut of whatever was on it that day.

Usually she was
mulling over various family issues, such as what to do about keeping the cats
off my writing desk (this was not a problem to me but seemed so to mom). Other
times it could be political issues such as conflicts of interest on the Williamston
school board. Mom’s mind was much too mercurial to sit on one phrase or follow
her breath. It took her all over the world, and she did her best to solve every
problem in it.

The other morning
I let my coffee meditation take me to the previous night’s experience of seeing
Steve Earle at Grand Rapids’ Intersection
night club. As neatly documented here
by my friend and bandmate John Sinkevics, it was a memorable display of Earle’s
musical prowess and political passions. All gravel-voiced and scrub-bearded,
Earle took us on a tour of his unusually wide musical universe – country, folk,
bluegrass, rollicking Celtic and growling rock – while railing against war, coal-mine
rape, 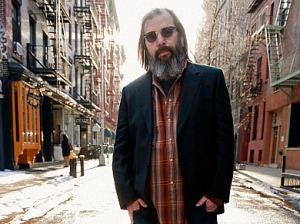 It was an artist
at his best: Saying just what he wanted to say from a lifetime of drug addiction,
failed marriages, pursuit of justice and devotion to his art. Unafraid to tell
it like it is or should be, refusing to back down from what he believes
regardless of how hopeless it seems. Introducing his stirring hymn “Jerusalem,”
he said, “I’m a
recovering heroin addict. I can’t afford to think of anything as a hopeless
case or a lost cause.”

Mom would not have loved the music but would have
appreciated the spirit. She too loved music and pursued justice fearlessly, no
matter how much it inconvenienced or annoyed. From her I inherited both those
passions.

Listening to Earle preach his fiery gospel and sing his
heart out, it occurred to me this was a kind of legacy. In my
love of music and pursuit of the just, mom’s spirit burns bright, and clangs noisily
in the hard strum of a scratched-up acoustic guitar.