the joy of the Beatles, then and now

“They stamp about and shake and, oh dearie me, they just send the joy out to you.”
So did one ecstatic British girl describe the Beatles in a Nov. 18, 1963 Newsweek 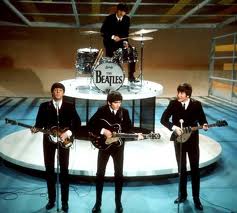 article titled “Beatlemania.” Her sentiment holds up nearly 50 years later as a succinct summary of the Beatles Effect. Considering it was published four days before John F. Kennedy was killed, it is all the more powerful now.
The dearie-me girl’s comment was one of few that accurately described the band in an otherwise astoundingly square story. It calls Beatles music “high-pitched, loud beyond reason, and stupefyingly repetitive. Like rock ‘n’ roll, to which it is closely allied, it is even more effective to watch than to hear.”
Being as it turns out the very pinnacle of rock ‘n’ roll, Beatles music remains “effective” in both the watching and hearing. This is due not only to the genius of the music, but the joy, excitement and hope exuded by the songs and the Beatles themselves – qualities we hunger for at least as much now as we did then.
Their continuing cross-generational appeal comes home to me in a short course I teach called “Love is All, Love is You: The Spirituality of the Beatles,” most recently at the Dominican Center at Marywood and beginning Feb. 28 at the Calvin College CALL program. The Marywood class includes two fathers and their teenage children, who seemed as keenly engaged in the subject matter as their parents.
One of the teens was struck by how high George carried his guitar in an August 1965 performance on The Ed Sullivan Show, the last time they would play that esteemed venue. It is a thing of beauty to watch, as they do indeed stamp and shake and sing most joyfully. John is in rare form with his goofy introduction to “Help!” This despite its desperate lyrics expressing the depression of what he later called his “fat Elvis period.” One class member called it the “most relatable Beatles song ever” with its “sad lyrics and happy music.”
Others marveled at Paul’s performance of “Yesterday,” the regretful ballad recorded two months after “Help!” — twin expressions of vulnerability by two maturing men. “I long for yesterday” takes on deeper resonance for those of use who have piled up many yesterdays since then.
But it’s the exuberance of the band that captivates with a freshness of spirit hard to imagine being possible now. The business-like Sullivan clearly has been charmed by the boys by this time, introducing them singly beforehand and afterward congratulating them on handling themselves “magnificently.” “Well come on, let’s hear it for ‘em!” he implores the screaming girls.
They scream for all of us who long for joy and hope delivered through thrashing guitars and gorgeous harmonies. The Beatles’ faces are streaming with sweat, their vocals dead-on and their instrumentals near-flawless in the face of this 747-level noise. Their cheerful energy defies the darkness of the times, then as now, even with all the darkness we know is to come in their own lives.
Their first Sullivan appearance was a supernova for 73 million viewers still in shock following JFK’s assassination, biting their nails over Russian missiles or getting pummeled by cops in civil rights marches. In his insightful book, “The Gospel According to the Beatles,” rock journalist Steve Turner writes the band “represented the best of what people longed for” in that dark, cold winter of 1964: “They represented laughter rather than tears, hope rather than despair, love rather than hatred, life rather than death.”
Beatles music still represents those longings. Despite the darker strains that would later imbue their songs, the body of their work speaks to the best in us. Theirs is a vision of joy linked to the power of the mind, inviting us to imagine a different kind of world. Have you heard? The word is love.
Oh dearie me.

4 Responses to the joy of the Beatles, then and now