and now, back to those golden oldies … from the ’90s 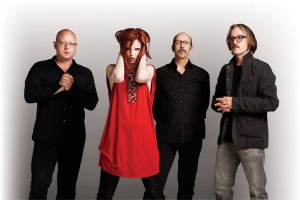 In a class I was teaching at Grand Valley State University a couple of years ago, I presented a segment on rock stars who had died at age 27. I focused on Kurt Cobain, figuring my room full of 18- to 21-year-olds would relate better to the Nirvana front man than to Jim Morrison.
How wrong I was. Most of them looked at me with blank stares when I cued up “Smells Like Teen Spirit.” Maybe some of them had heard the Weird Al Yankovic version but they sure didn’t know anything about Kurt Cobain. Of course not, you dope, I said to myself – these kids weren’t even born in 1991 when “Nevermind” came out. Kurt Cobain meant about as much to them as Tony Bennett.
With Nirvana’s recent induction into the Rock and Roll Hall of Fame, signifying 25 years since the release of their first recording, the point was brought home to boomers like me: The ‘90s are no longer a modern decade. “Smells Like Teen Spirit” is now an oldie.
Think about it. If you were 15 in 1967, digging Sgt. Pepper, the Stones and the Doors, an oldie was a record by Chuck Berry or Buddy Holly from the 1950s. A song 25 years old would have been recorded in 1942. We’re talking Glenn Miller and Dinah Shore.
This does not compute. I just can’t think of “Smells Like Teen Spirit” as in the same category as “In the Mood.” But generationally speaking, there we are.
The ’90s, despite giving us the first Iraq War and the rise of Newt Gingrich, also revived rock. The Seattle grunge scene brought back the electric guitar from those cheesy ’80s synths and drum machines. So in an attempt to put the ‘90s in their proper perspective and my mind in a sunny mood, I hereby offer a few of my golden oldies from the decade of we-didn’t-know-how-good-we-had-it:

• “One of Us” by Joan Osborne: I swoon over the grinding guitars and Joan’s soulful voice contemplating God as a slob on the bus. Even if she no longer sings it, my band the Honeytones does, so there!
• “1979” by the Smashing Pumpkins: A groove that hooks me like a pike in Lake Superior and pulls me along for a 4-minute thrill ride. Billy Corgan’s rat-in-a-cage snarl is under control in the service of a gloriously transcendent chorus.
• “Stupid Girl” by Garbage: An early bit of sweet nastiness from the decade’s best band. They’ve never been huge, but fans of the mesmerizing Shirley Manson and co. will never understand why.
• “Basket Case” by Green Day: The definition of irresistible. Punk purists sneer that Billie Joe and the boys sold out with this full-throttle joy ride of adolescent angst. Poppycock. It was just so damn good that lots of people liked it. Horrors!
• “Follow You Down” by the Gin Blossoms: A three-minute trip to jangle heaven. If you don’t smile at this song you need regression therapy, back to the days when all you needed was a sweet tune on the radio to make you feel on top of the world.
• “Breakout” by the Foo Fighters: Not one of their better-known songs but certainly one of the best with which to bang the head. They come no cooler than Dave Grohl, who can scream with the best of them while gamely playing the dork on video.
• “She’s So High” by Tal Bachman: He seemed to have learned some nice licks from his father, Randy, but it’s Tal’s gorgeous falsetto that lets him get away with hitting notes as high as the ledge from which the winged damsel leaps. Whatever happened to this guy anyway?
And now for two entries from our guest star John Sinkevics, my bandmate and maestro of the music blog LocalSpins.com:
• “Losing My Religion” by R.E.M.: Perhaps the perfect R.E.M. single, a brilliantly compelling nugget that not only represented the heart, soul and sound of one of the era’s most important rock bands, but also struck a chord with mainstream audiences, reaching No. 4 on the Billboard 100 — their highest charting U.S. hit. And to think it featured a mandolin …
• “Smooth” by Santana with Rob Thomas: For a few years, it seems, this song was omnipresent — on radio, TV, you name it. And it deserved that sort of treatment: It’s a unique and catchy pop tune starring an iconic guitarist and a captivating rock voice.

Hey, you know what? That was a pretty darn good decade of music. I’d love to hear what you thought of it, and what you listened to.

7 Responses to and now, back to those golden oldies … from the ’90s