Posted on February 7, 2015 by soulmailing 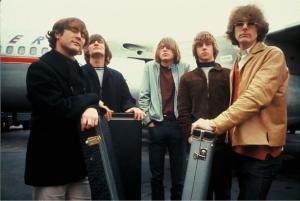 In the fall of 1965 I was an invalid. I injured my back playing football in the backyard and spent the next three months in a body cast, encased chest to knees in mummifying plaster. Don’t ask about the details. Suffice to say I was mostly immobilized, and spent long afternoons flat on my back, thinking about sports and girls and listening to the radio.

Thank God for that radio. Through that tinny little transistor I was helped through those tedious days by the Beatles, the Stones, the Supremes and my first sweetheart, Petula Clark.

From October through November, the top Billboard 100 singles were “Yesterday,” “Get Off My Cloud” and “I Hear a Symphony.” Phew. That’s just two months. The year began with “I Feel Fine” atop the charts – the first of five No. 1 Beatles hits that year – quickly followed by “Come See About Me” and “Downtown.” The year ended with “Turn! Turn! Turn!” by the Byrds and “Over and Over” by the Dave Clark Five.
In between you had “Help Me, Rhonda” by the Beach Boys, “This Diamond Ring” by Gary Lewis and the Playboys (a big favorite of mine at the time), “I Got You Babe” by Sonny and Cher and that stick of Motown dynamite, “Sugar Pie Honey Bunch” by the Four Tops. I grooved to that thing all summer long while playing with my cousin Lance at my grandparents’ house in Detroit.
This is also the year that “Like a Rolling Stone” assaulted the airwaves with Dylan’s ragged growl, rising to No. 2 despite its unprecedented six-minute length. And of course Dylan’s transcendent “Mr. Tambourine Man” was taken eight miles high by the Byrds, tinted-glasses pioneers of folk-rock.

Holy cow. Seen through the lens of pop-culture history 50 years later, this bunch simply can’t be beat. I defy you to name another year in which such a broad and stunning cross-section of American popular music poured out of a single source – in this case, my trusty transistor radio.

The year 1965 was when the sub-genres of rock and roll, folk and soul came together to form the larger creature known as Rock. Pop music had yet to split off into sub-species each with their own dedicated stations and followings. It was all coming to us at once. Pretty much everything that was great you could hear on top 40 or even see on the Ed Sullivan Show, including Mick Jagger’s gleeful sex swagger.
This is not to mention the wonderful songs that didn’t quite make the top tier, such as the We Five’s “You Were on My Mind,” an exuberant rendition of folksinger Ian Tyson’s doleful lament, “I got troubles.” When I was in the hospital with my back, my roommate, like me perpetually plugged into his transistor, would alert me to the song’s onset by shouting, “’I got troubles’ is on!”
Oh, harbingers of future troubles were there, such as Barry McGuire’s apocalyptic “Eve of Destruction,” and cotton-candy novelties like “I’m Telling You Now” by Freddie and the Dreamers. But as I recall, nobody was trying to get our attention by sticking out their tongue and humping a foam finger. 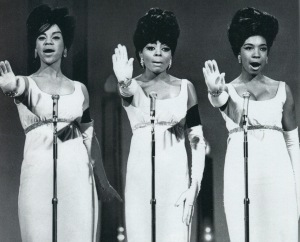 As cool as cool could be: Diana Ross and the Supremes

No, we had Diana Ross seductively cooing “Come on boy, see about me” and Petula demurely purring, “The lights are much brighter there, you can forget all your troubles, forget all your cares.”
Sigh. Petula made me forget mine, for three minutes at a time anyway.

So did all the other marvelous music-makers of 1965. It was just one year, but it heralded a lifetime of sonic joy.