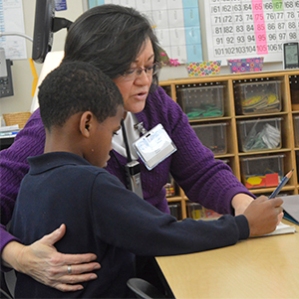 This story, part of a yearlong series on poverty we are doing at School News Network, took me into the classrooms of two remarkable teachers in Grand Rapids. For a fuller glimpse of what they do there, you can check out the story package here.

The boy was not having a good day. A new student in Vicki Boase’s second-grade classroom, Ja’Quon sat scowling in his seat while other students were getting to work. Boase took him into the hall and had a talk. Later, she sat next to his desk to help him with his assignment, writing a personal narrative.
“Do you have trouble writing, honey?” Boase asked in a mild voice. “Why don’t you tell me what you want to write about?” Then, she did the writing as Ja’Quon began telling his story: “I read a book to my little brother. …”
In a high-poverty school such as hers, students often need such personal attention, said Boase, who teaches second grade at Palmer Elementary School in northeast Grand Rapids. Finding out the reason for the frown, and gently helping them with their work, may help children feel secure enough to focus on the paper and pencil.
“Really, they just need to know that you care about them unconditionally,” Boase said after class. “That no matter what they do, you’re on their side.
“That’s the culture we have here,” added Boase, in her 25th year at Palmer. “Making sure kids know whatever you’re dealing with at home, we’re going to do whatever it takes to make you feel included. Yes, we care about what you learn, but we care about you and what’s going on with you.”
That philosophy, coupled with high expectations and well-structured lessons, make teachers like Boase especially valuable in low-income schools, experts say. For students like Ja’Quon, an effective teacher can make a big difference in a struggling life.
High Expectations Lead to High Achievement
While schools employ multiple strategies to help students in high-poverty schools, the power of a single teacher to impact a student should not be under-estimated. Studies have shown effective teachers can significantly raise academic achievement, graduation rates and even lifetime income.
Highly skilled teachers can make a dramatic difference in closing achievement gaps, especially for low-income and racial minority students, said Sarah Winchell Lenhoff, director of policy and research for The Education Trust-Midwest.
“There’s not really a silver bullet,” Lenhoff said. “But if we were to point to one thing that would potentially make a huge difference, it’s getting more highly effective teachers in front of the kids who are furthest behind.”
Many of the practices of effective teaching, such as close tracking of students’ performance data and equally high expectations for all students, are being used at Palmer, one of the highest-poverty schools in Grand Rapids Public Schools.
Some 92 percent of its 300-plus students qualify for free or reduced-price lunches. But Palmer scores above the average school in GRPS in standardized tests, and at the top for high-poverty schools. Further, in an annual survey of students, 95 percent of second-graders said their teachers are caring and provide challenging instruction.
Lenhoff lauded Palmer and other GRPS schools for making extensive use of data and taking several measures of teacher effectiveness. Highly effective teachers let “data drive their decision-making” for teaching strategies, she said, and expect the best from students regardless of background.
“Teachers who have a belief that all children can learn at high levels are more likely to teach all children at a high level, and not differentiate by race or income,” Lenhoff said.
A School of Many Challenges
Palmer School faces more than economic challenges. As a regional center for immigrant refugee families, Palmer hosts students from countries such as Congo, Bosnia and Myanmar, who speak close to a dozen languages. Half the staff is trained in teaching English-language learners.
The school does not meet these challenges on its own. Two church partners and the North Kiwanis club help with everything from clothing and school supplies to camp scholarships and tutors. It has an active parent-teacher group and a sense of pride as a neighborhood school.
And, crucially, it has teachers adept at working with immigrant students and those whose parents may not have money for a school uniform. Vicki Boase and Amy Topp, who teach second grade, both go “above and beyond” to help students, from closely tracking their academic progress to washing a dirty face, said Principal Angela Cook.
“They have a very gentle demeanor. They take the time to speak to students,” Cook said. When problems arise, “They help the kids think it through. They give them options.”
The two also dive deeply into test data to pinpoint students’ classroom needs, whether it’s helping a struggling student or keeping a high-achieving one from being bored, Cook added.
“They are doing everything they can” to help students grow academically, she said. “They’re one of the first two that are saying, ‘Hey, I’m not seeing what we need to be seeing by now.”

Classroom Lessons up Close
Their attention to individual students while keeping the whole class on task is evident in a visit to Boase’s and Topp’s classrooms. On one morning, both were teaching how to compare and contrast two similar stories. They asked students to think about the stories with curiosity, firmly calling the class to order when necessary.
In Topp’s class, students sitting on the floor talked about the similarities and differences between two books, “Anansi Goes Fishing” and “Dinner for Spider.” She wrote their examples inside bubbles on a white board, such as “Both about catching food,” then pressed them about the spider book.
“Are they really trying to teach second-grade kids how to catch food with a web?” she asked. “What’s the big idea?”
“There’s different ways to do something,” one boy ventured.
“Do you like that? Is that good enough for you?” Topp asked the students, who responded with thumbs up. She filled in another bubble.
After further questions, she has them pair up to write a “sequence” of the Anansi story. They fold four sections of paper, marking each with a sentence and illustration describing its progress.
Despite their white and light-blue uniforms, her 25 students are a colorful mix of ethnicities and cultures. Two girls wear Muslim head coverings. A boy working on a computer recently came from Congo. One student speaks a variation of Swahili. Topp respects their differences but has high expectations for all.
“Just look at the child, the individual: What do they need and what can we do for them? As a teacher, that’s what I do,” Topp said after class. “I expect a lot of them.”
Doing Whatever it Takes
Topp heads the school’s Student Success Team, which meets regularly to discuss students with behavior problems and families needing help. She has met over lunch this year with girls struggling with self-esteem, and incorporates yoga into her classes. That school-wide attention to the individual is modeled by Cook, the principal, who regularly reads with small groups.
Topp is keenly aware of the financial struggles of her students’ families, but doesn’t let that lower her expectations. In addition to homework, students are required to read 20 minutes a day, verified in a log.
“In many ways the cards are stacked against them,” said Topp, in her 16th year of teaching. “That doesn’t mean they can’t think deeply.”
In her view, school is her students’ job, and it’s her job to help them do it well.
“The high expectations combined with a loving, safe environment are the two key things,” she added. “I try to make sure they love me.”
Love and high expectations seem to prevail in Vicki Boase’s classroom as well. In 37 years of teaching, she has found them to be a powerful combination – especially among low-income students.
Since coming to Palmer in 1990, she has seen waves of families arrive from Vietnam, Bosnia and Somalia. She has seen a lot of working poor and single parents working third shift. But she has also seen families committed to their neighborhood school, and resilient children who can jump to a higher bar with enough support.

Love, Boundaries, Structure
“The big thing about working in a school with poverty is having a different set of eyes that sees beyond their academic record,” Boase said. “You have to know how to say, ‘What’s going on with you today?’ They might have heard Mom and Dad talking about how they’re going to pay the bills. They might be grumpy and might not come in having had a good night’s sleep. You have to see what’s going on in their lives.
“But for a lot of kids, it’s the safest place they can come to, where they feel like they’re cared for and loved unconditionally,” she added. “They need to feel like they can get grumpy and you’re still on their side.”
Students also need firm boundaries, however, and clear expectations for acceptable behavior, Boase stressed. She continually reinforces character traits long supported by the school community: respect, responsibility, caring, courage and integrity.
In class, she periodically retrieves the wandering attention of 25 students with well-worn catch-phrases: “Whole class, whole class, come back to me! Whole class, whole class, one, two, three!”
Yet on the whole the class was orderly this day, whether Boase was leading whole-class instruction with a projector and a microphone, or sitting on the floor reading with six boys. While she was doing the latter, a student teacher and an aide were working with other small groups.
Group Lessons, Individual Attention
It was part of a lesson framework called the “Daily 5,” where students have the option of five activities such as reading to themselves, read with another student or listening to someone read. Students are grouped according to their literacy needs. She alternates these small-group times with whole-class sessions.
On this morning, she had them write personal narratives about family memories. Armed with writing binders full of high-frequency words and more colorful “dollar words,” they learned about making transitions and describing details.
“When you write something, you want people to be able to see it,” Boase told them. “You really want to focus in with your binoculars to see every tiny thing.”
Emma Jackson intently described her Halloween costume. But Ja’Quon was having trouble writing anything, until Boase patiently coached him through it.
“See my writing?” he said to the boy next to him, proudly pointing to the piece he had written about his brother.
Ja’Quon returned to his previous school a couple weeks later. Boase was frustrated she didn’t get to work with him more, but hoped she had made a small contribution to his life.
“My hope is that his collective experience with the teachers in his life have made him feel valued, loved and capable,” she said later. “That’s the foundation of what we do each day.”
Boase plans to retire at the end of the school year, but feels blessed to have made many students feel valued, loved and capable.
“I just love looking in their eyes every morning,” she said. “I love making a difference.”