the Beatles still speak to us, though much has changed 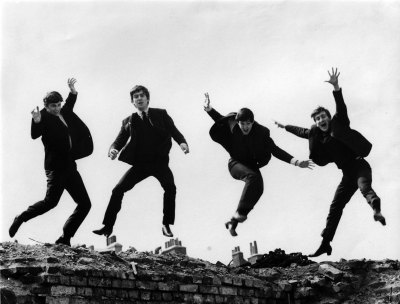 One of my favorite Beatles pictures: jumping jubilantly above the chimney pots and hard scrabble of their early lives

Music lovers of all ages have been blessed to experience the era of the Beatles in real time. It’s sort of like, “Mozart? Oh yeah, I saw him when he was first playing gigs in Salzburg. Dude was incredible!”
I have found in this most organic of bands a bottomless source of inspiration and joy. So when David Crumm, editor of Read the Spirit, an online magazine of spirituality and culture, invited me to write a five-part series of blogs on Beatles songs, it took me about 35 seconds to say yes.
Having taught an adult-learners’ course called “Love is All, Love is You: The Spirituality of the Beatles,” I had heard many times how deeply their music continues to affect people across the age spectrum. It was a delight to dig back into just a few of their songs that continue to bring joy and meaning to so many.
Here are the pieces I wrote for David, to whom I am deeply grateful for the opportunity. They appear in the order in which they were published.
Feel free to dive in if Beatles music moves you. I can say with reasonable confidence that a splendid time is guaranteed for all!

“‘Sending out the joy’ for more than 50 years”
When I first saw the Beatles perform on the Ed Sullivan Show on Feb. 9, 1964, they were singing a language I didn’t get, at that point. But even at age 11, I sensed it had something to do with excitement, sexuality (still latent in my case) and unrestrained joy.
More than 50 years later, the Beatles’ music still speaks to me, in ever-fresh ways. The songs’ sonic ecstasy endures, but their meaning has deepened with new bends in my life’s journey.
See more at: http://www.readthespirit.com/ourvalues/the-beatles-sending-the-joy-out-for-more-than-50-years/#sthash.z5PwYgMH.dpuf

“Do you still long for yesterday?”
Paul McCartney maintained that the melody of Yesterday came to him in a dream. He went around for days asking people if they’d heard it before, convinced he had unwittingly downloaded somebody else’s song. Finally, he realized it had come from his own subconscious.
Maybe that’s why the song entered into our cultural consciousness so readily. Besides being a No. 1 single in 1965, it’s been recorded by other artists more than 2,500 times.
See more at: http://www.readthespirit.com/ourvalues/the-beatles-do-you-still-long-for-yesterday/#sthash.9BdI9gn9.dpuf

“Do we still believe love can change the world?”
George Harrison was the most overtly religious of the Beatles, with his sitar-inflected affinity for Eastern thought. But Paul McCartney and John Lennon, albeit agnostics, were secular evangelists for the revolutionary power of love.
They proclaimed it in The Word–Have you heard? The word is love–and the utopian All You Need is Love, which in a worldwide 1967 broadcast insisted “love is all you need” despite ample evidence to the contrary.
See more at: http://www.readthespirit.com/ourvalues/the-beatles-do-we-still-believe-love-can-change-the-world/#sthash.sSD3pxMB.dpuf

“There are places I’ll remember all my life”
I have never visited Penny Lane, although I fully plan on it. Yet even if fate says no, I can vividly see its blue suburban skies and the fireman with an hourglass.
That’s due to Paul McCartney’s brilliantly colored portrait of the Liverpool street where he used to catch a bus on the way to John Lennon’s house. If you Google street views of Penny Lane, it looks like a nice but unremarkable commercial district. Listen to Paul’s song, though, and it takes on the magical hues of a Maxfield Parrish painting.
See more at: http://www.readthespirit.com/ourvalues/the-beatles-there-are-places-i-remember-all-my-life/#sthash.CjmrWhrn.dpuf

“And in the end … Let it Be”
One of the deep bonds between Paul McCartney and John Lennon was that they both lost their mothers at an early age. Paul’s mother, Mary, died of cancer when he was 14, and John’s Julia was killed by a car when he was 17. …
While John worked out his feelings explicitly through songs such as Julia and Mother, Paul’s were more indirectly expressed and, characteristically, to uplifting effect. Let It Be finds Paul taking solace from his mum speaking from beyond the grave–and passes it along to us as a comfort for our own hardships.
See more at: http://www.readthespirit.com/ourvalues/the-beatles-and-in-the-end-let-it-be/#sthash.G3VMEvFF.dpuf

This entry was posted in Uncategorized and tagged John Lennon, Paul McCartney, the Beatles. Bookmark the permalink.

2 Responses to the Beatles still speak to us, though much has changed