confessions of a ‘Downton Abbey’ slacker 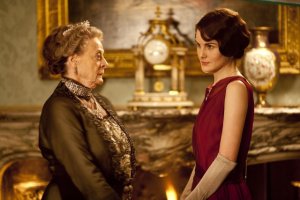 One evening many years from now, when Andrea is knitting a sweater by the fireside and I am sipping medium-priced wine, the college student we had over for dinner will turn to me and say, “We’ve been studying the Golden Age of Television, in the early 2000s. ‘Downton Abbey,’ ‘Breaking Bad’ and all those awesome shows. You were there – how great was it?”

I will have to take a long sip of chardonnay, look at this expectant young person and say, “I’m sorry, but I missed it.”

The young person will be disappointed, but luckily Andrea will chime in, “Oh, I saw a lot of it. ‘Dexter’ was amazing. So were the ‘The Sopranos,’ ‘Oz,’ ‘Six Feet Under,’ ‘Sex and the City.’ And ‘Homeland’ – my God, it just about killed me.”

I will be able to honestly say I too loved “Homeland,” having endured every single episode of CIA agent Carrie Mathison (aka Claire Danes) and her bipolar, sweat-inducing heroism. But as for the rest, I will know as little about them as I will about “War and Peace,” which I still will not have read.

In this widely acclaimed Golden Age of Television, I am at best an outlier, at worst a cultural pariah. I experienced a certain amount of shame every time I was at a bar and people started going on about “Dexter,” and can you believe that last episode?  I listened timidly like they were talking about their investments, waiting for the opening to say, “So, how about those Tigers eh?”

Nowhere is this cultural cluelessness more acute than with “Downton Abbey,” which in its fourth season is the finest wine on TV. People structure their Sunday nights around it. The New Yorker writes about it and NPR talks about it. It’s one of the hottest cultural conversations going, but dolts like me have nothing to contribute.

I recently came out as a non-Downton-watcher on Facebook, admitting the guilt I feel. Holy cow. More than 40 comments came forth, everything from “Yes, you should feel guilty” to “Maggie Smith is incredible” (I know, I know!) to “I don’t watch it either” to “all the truly intelligent people everywhere on the planet watch Downton Abbey.” (Pretty sure that last one was sarcasm.)

Despite several fellow non-Downtoners coming to my aid, I felt even guiltier afterward. Truly, it was clear how much many of my friends love and watch this show. So why don’t I?

The feeling this engenders is more than guilt. It is that I am MISSING OUT. Just like I missed out on “The Sopranos,” “Madmen” and all the other shows friends told me I should watch. Worse, thanks to Netflix and iTunes, the opportunity is always there to still watch these shows. Just set aside an entire weekend, forget the laundry and you’ll be all caught up.

I have watched enough episodes of these shows to know I would like them. But there are two problems in catching up on “Downton Abbey”:

1) I do not binge-watch.  I grew up watching “Rawhide” at 8 p.m. Friday nights. I just will never feel right watching 10 shows in two days, as if time has no meaning in the universe.

2) I’ve already seen it. Back then it was called “Upstairs, Downstairs.”

I religiously watched almost every episode of that marvelous “Masterpiece Theater” series from 1971 through 1975.  I delighted in its rich characters: the regal but fundamentally decent Lord and Lady Bellamy; their dashing but disappointing son James; the haughty butler Mr. Hudson and feisty cook Mrs. Bridges; and most of all, the stern but kind-hearted maid Rose.

To see Mrs. Bridges offer up her “win the war pie” as a patriotic menu during World War I brings back the humor and poignancy that anchored my Sunday nights as I recovered from the Sixties. Forty-plus years later, I have no need of new characters to enact essentially the same story. I want my butler to be Mr. Hudson and my maid the lovely Rose. I would rather be nostalgic than hip.

Oh, I will probably watch “Downton Abbey” someday, with Andrea knitting by the fire after we’ve had our Sunday-morning drive.

6 Responses to confessions of a ‘Downton Abbey’ slacker