betrayed by my body, again 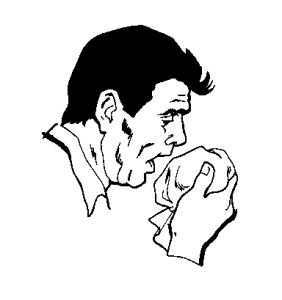 I always forget how much I hate being sick. It makes an otherwise normal life into an unpleasant chore, all the day and night long. The fact almost everyone does it at this time of year is little consolation. I believe I brought on this apparent case of “the common cold” by briefly reflecting on how glad I was to not be sick. This thought came to me just the other day while driving around, in the form of something like, “Well, at least I’m not sick.” So much for counting that particular blessing. As I write I am sitting in my big Marty Crane-style recliner, with my cat Abbey on my lap. Little wads of Kleenex litter the floor around me, each one of them nasty evidence of a nose-blow. I am like Meg Ryan in that scene in “You’ve Got Mail” where Tom Hanks comes to visit her with flowers, and she is miserable with what she calls a “tempachur.” A cold makes any hardship ever so much worse. Occasionally I also hack up mysterious gunk with a cough, as my body seeks to expel whatever crud has come to infest it these past few days. My sneezes are as violent as Bruce Willis slamming a bad guy against a wall. Andrea says I sneeze so loud to get attention. I do admit it makes me feel a little better. What is this “common cold” anyway, and why is it so frickin’ common? The Mayo Clinic says more than 100 viruses can cause a cold, the most common being the rhinovirus. (Did this actually originate with rhinos?) One can catch a cold, says Mayo, simply by being with another person who coughs, sneezes or talks. “Talks”? I got this cold just by talking with someone else who had one? If that’s true we’re all doomed. Might as well just come over and shake my hand, pal, because the rhinovirus is going to get you sooner or later. But truth be told this little rhino is but a mouse compared to the backache/flu/life disabler I recently endured. This began on New Year’s Eve day with a strange ache in my lower back. Although I danced the eve away with Andrea to the Lazy Blue Tunas, the ache grew and grew. Then came a hard, dry cough as if I’d been working in a coal mine. Then, no doubt aggravated by the cough, the back ache quite suddenly became medieval torture. It happened as I was trying to pull on my socks: a sharp, stabbing pain that made me exclaim something I choose not to print here. And from then on, the pain got way worse. The next morning I couldn’t get out of bed because every slight movement of a knee or toe caused a back spasm that felt like — well, again we will not be printing that. All because of pulling on my socks. It is both humbling and depressing when the body betrays you. Suddenly you go from this confident, productive being to a pathetic, griping slug. Everything you do takes effort and nothing you do feels good. You stand at the drug store counter with an arsenal of drugs and the cashier looks at you with pity. “Man, it must suck to be you,” she thinks. “Just you wait your turn,” you think back. What is the upside of being sick? Why did God create the rhinovirus? Is it just a random ingredient in the evolutionary soup, like a bad onion? Am I supposed to learn something from this? Wouldn’t life simply be better without the rhinovirus? Guess I’ll have to store this with my other Questions to Ask God, like “Why are there mosquitoes?” and “Who invented jokes?” For now, you’ll have to excuse me. I need to blow my nose, drink plenty of fluids and watch another episode of “Mad Men.”

9 Responses to betrayed by my body, again